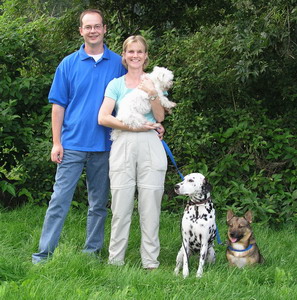 We are Paul and Sandra Hurkmans. In this picture we are joined by Humphrey the Maltese, Joschka the Dalmatian and Kari the Västgötaspets or Swedish Vallhund.

As you can see from the site, we love dogs and have a lot of fun with them. You can read a bit about us below. The links to our dogs' pages are in Dutch, so you might need Google Translate to decipher them.

As long as I can remember, we always had dogs. It started with a black Standard Poodle, Moortje. My first memory of him is my mother cleaning up its puke. Sadly, Moortje was too excitable for our family and we couldn't keep him. Next came a semblance of a dachshund. Snuf had a character and a mind of his own, often did not want to do what was asked, but was still a fun friend. We played a lot together. Snuf died at the venerable age of 14, when I was already away from home in college.

In secondary school, a classmate introduced me to a dog club where they trained police dogs. At that club I was taught a lot about how to handle dogs, and in a relatively positive way, which was an exception in those days. I especially learned how to read a dog's body language. This learning process was greatly speeded up when I was sometimes allowed to be a helper, wearing the padded sleeve and suit. Believe me, you learn fast when you are eye to eye with a Bouvier des Flandres or a Malinois aiming to latch on to your sleeve!

The only time I spent without a dog was in college in Maastricht. And it was then that I noticed how much I missed having a dog around. Then I met Sandra, who was if possible even more crazy about animals than I, so that this animalless period didn't last too long. In Maastricht, we often babysat Flopje, a hughe German Shepherd with which I rambled around Maastricht and into Belgium, having a nice pint in the sun in a cafe along the way. Eventually we 'kidnapped' Flopje when we were able to offer him a good home, as his owners couldn't provide him with the stable life and walks that he needed and deserved. But that was some years later.

After our studies, we moved to The Hague, where we soon got our own dog from the pound. That was Boefie, a Bouvier. She carried at least 10 kilograms too many and was a bit scared of older men. She overcame this fear however. Taking off the weight took a few years longer, but we managed eventually. Her greatest love in life was the beach. Normally, she would trail behind during walks. But on our way to the beach, she would run out in front of us, turning around from time to time as if to say "hurry up, hurry up, I want to go into the water!" Yes, she loved the water. Even when it was freezing, she would still lie down in the surf with a ball or a stick in her mouth.

After moving to Pijnacker and adopting Flopje, we wanted to add a puppy to the household. That was Humphrey the Maltese. Our first puppy and we wanted him to be well-mannered, so off to the dog club we went! That's when Sandra learned how fun training is. Humphrey turned into a great, well-mannered little dog. Yes, well-mannered Maltese do exist!

After Flopje died at 12 years of age, we wanted another breed. We chose the Dalmatian. We thought long and hard about it, did our research, read up on the breed and made our decision. We wanted a dog who would bring a bit of spark to our household. Well, Joschka certainly did that! Sandra did the obedience training and later agility at the dog club while I taught Joschka manners like stopping and sitting before crossing the street, walking on lead etc. And very important in our small densily populated country: teaching him to only relieve himself where it's allowed and it won't be a nuisance to other people (or cleaning up after him).

Our Bouvier turned out to be a very good, steady leading lady who reigned supreme over the other dogs until she passed away at 15 years of age. She was impressive. She hardly needed to look at another dog for him to know that here was a Very Important Dog indeed and that there was no arguing with her. And she taught Joschka a doggy manner or two.

I've always loved animals. At home we almost always had a dog. Also I've had gerbils, hamsters, guinea pigs and rabbits (not all at the same time), though a dog was always at the top of my list. Anyway, I always thought a household without pets is a sterile, cold place. I am happy to have found Paul, who is a soulmate to me in this respect (and many others).

As soon as we could afford it after our studies, I started working part time so that we could have a dog. That was Boefie, a Bouvier des Flandres. Not too long after she came to our household, Flopje, my sister's German Shepherd, joined her when we moved to the country town of Pijnacker. Humphrey the Maltese was our first puppy and for the first time I took dog training classes, which was at the KC Delft. I loved doing it and the little guy did very well. When Joschka, our Dalmatian, joined us and all seemed to go well with him too, I started as a trainee instructor at the club.

Reading and learning about dogs was always something I enjoyed. As a trainee and because of our problems with Joschka, my hunger for knowledge only grew larger. Searching on the internet, I found information on clicker training. It intrigued me, especially the idea that you can train a dog without punishing him. I couldn't believe that at first. In 1996 I took my first steps in trying this out with my dogs and soon I was completely hooked. What a great training method!

Soon I wanted to teach clickertraining at our club. Because it was a new method, for myself and in the Netherlands, I wanted to get a good foundation and see how I could teach this. The KC Delft dog club gave me the opportunity to try it out and in january 1999 I started my first clicker training class, an introductory class. I never looked back. Now I teach obedience classes and dogdance, as well as the clicker training foundation course, which still exists.

Read more about our first Swedish Vallhund (Västgötaspets) Kari and our current Västgötaspets girls Ronja and Yuno. (You might need Google Translate, as all the info on our dogs is in Dutch).